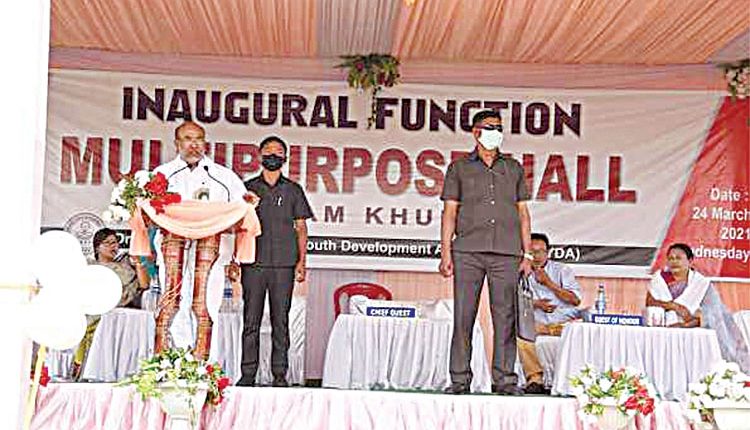 Imphal, March 24 (FN Bureau) Chief Minister N. Biren Singh said that even though Article 19 of the Constitution guarantees Freedom of Speech and Expression to every citizen of the country, nobody should misuse it. He was speaking as the chief guest at the inauguration function of a multipurpose hall at Laipham Khunou Mitong Lampak in Imphal East District today. N. Biren Singh said that Clause 2 of the Article permits the State to impose reasonable restrictions on the exercise of the right if anybody breaches decency and morality, and in the interests of the sovereignty and integrity of India, the security of the State, public order, etc. The law would automatically take its own course if anybody violates it, the Chief Minister said.

Maintaining that the current generation is probably losing the sense of talking with decency and disciple to elders and fellow people, the Chief Minister said that degradation of decency, morality and discipline is quite visible among the youth. He said that that State Government’s active efforts towards popularizing Thang-Ta (Manipuri martial art) and encourage the youth to practice it is an earnest effort to instill them discipline in their minds. Stating that many people had lost their lives at young age in the State due to drug abuse and excessive use of intoxicants, the Chief Minister expressed concern that the number of young widows is alarmingly increasing in the State. As such, people need to join hands to fight drugs and intoxicants to save the State from further deterioration, he observed.
The Chief Minister also said that everybody should take their chosen professions seriously and they must not take their duties for granted. Nobody should work to pass time but to work diligently for the collective betterment of the State, he said.

India Industrial Land bank to strengthen Manufacturing Base in India