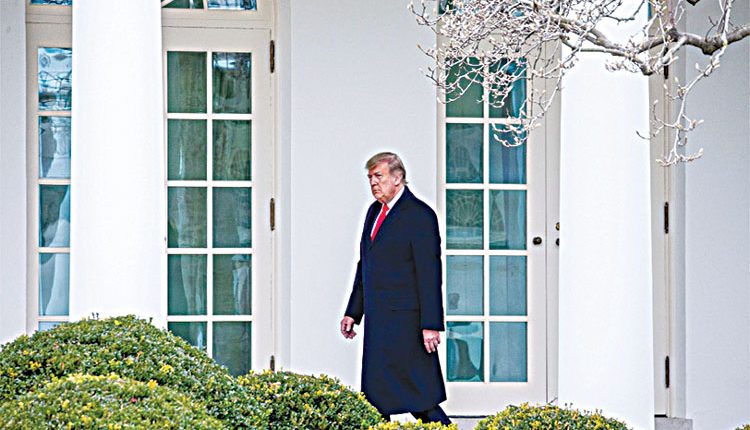 Washington, Jan 14 (FN Bureau) Donald Trump has been impeached again, becoming the first US President to be impeached twice. The House of Representatives voted 232 to 197 on Wednesday to impeach President Trump for ‘inciting violence’ when his supporters had last week stormed the Capitol.

Senate Majority Leader Mitch McConnell left open the possibility of voting to convict at a trial after Trump leaves office next week. Ten Republicans also voted to impeach Donald Trump. Donald Trump is the first US President to be impeached twice. In December 2019 he was impeached by the House of Representatives for abuse of power and obstruction of Congress charges of alleged attempts to force Ukraine into probing Joe Biden’s son. But the Senate, where the Republican party had a majority, acquitted him. President-elect Joe Biden said after the impeachment that the members of the House of Representatives had exercised the power granted to them under US Constitution and voted to impeach and hold the President accountable. ‘It was a bipartisan vote cast by members who followed the Constitution and their conscience. The process continues to the Senate,’ Biden said. In an apparent damage control exercise Donald Trump, in a public statement, condemned violence and asked his supporters to remain peaceful. ‘Violence and vandalism have absolutely no place in our country and no place in our movement,’ he said in a video statement after the House voted for his impeachment.

He, however, did not speak about his impeachment. Donald Trump who leaves office next week, has been accused of inciting violence against the Government after his supporters in hundreds stormed the Capitol. Four people were killed in the mayhem. President-elect Joe Biden takes office on January 20. Ahead of the swearing-in ceremony of the next President, security has been stepped up in apprehension of breach of peace with additional 5000 members of the National Guard slated to be deployed on the day of inauguration. Officials said the total number of the National Guard to be deployed could increase to 20,000. President-elect Joe Biden was briefed by security officials on Wednesday on the arrangements for the swearing-in. ‘The President-elect and Vice President-elect are focused on safeguarding the security of the American people, our institutions and our democratic values,’ Biden’s team said in a statement.