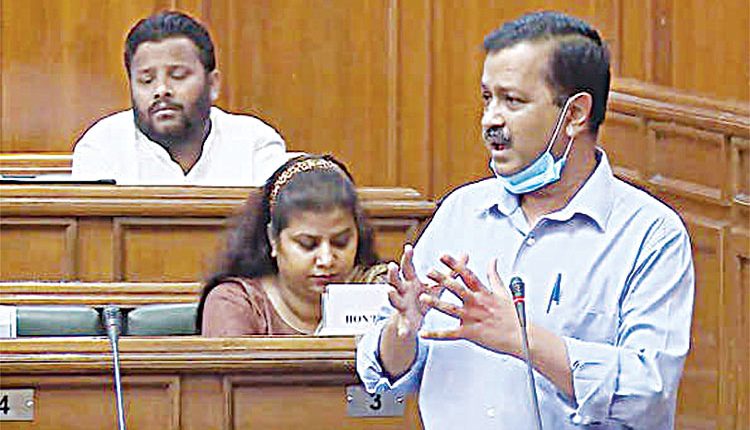 Speaking on the Motion of thanks on the Lieutenant Governor’s Address in the Delhi Assembly, Mr Kejriwal said, “I am a devotee of both Lord Rama and Hanuman. Lord Rama was the emperor of Ayodhya. During his rule, it is said, people were content, with no sorrows in life as they had access to all basic facilities. This was called the ‘Ram Rajya’. This is accreditation and cannot be paralleled by us humans. However, even if we draw inspiration from this model of ‘Ram Rajya’ and seek to try and establish a similar society, we would be successful in life. Hence, we have been constantly striving to establish this model of ‘Ram Rajya’ in Delhi for the past 6 years based on 10 principles.” “No one should go to sleep hungry – whether there is a pandemic or not. For this, the government adopted numerous measures and formulated various policies. During the pandemic, 1 crore people were provided with dry ration, 10 lakh people were given access to cooked meals twice a day. Now, the doorstep delivery of ration seeks to further this view.”

“Secondly, all children should gain access to quality education. Till now, the perceived notion was that children belonging to the lower strata must go to government schools; while those belonging to the affluent class should attend private schools. This distinction was blurred by the Delhi government. Each child now has access to similar opportunities and quality education irrespective of their economic background,” he added. “Thirdly, people belonging to all sections of society must have access to the best healthcare facilities. The condition of government hospitals was improved manifold, Mohalla clinics were established and now we would begin with the process of establishing Mahila Mohalla Clinics. Hence all citizens of Delhi- whether rich or poor would have access to good healthcare facilities. Fourthly, no matter how poor the individual is, in many states, the rate of electricity varies from Rs 10 per unit to Rs 7 per unit. We must understand that electricity is not a luxury, it is a necessity. In light of this, the Delhi government decided to provide free electricity to all under 200 units of consumption. Today, Delhi is the world’s only city that provides free electricity to its citizens, 24×7, free of cost,’ he said.

“Today, the governments highly charge the citizens in order to provide them access to water. This puts the poor in a critical situation- as, he might steal for survival, after which he might then be put behind bars. Hence, the Delhi government provides free access to water up to 20,000 litres. Sixth, each individual is entitled to employment and the government is working vigorously in this direction, formulating various Startup policies and holding multiple Employment Fairs. I am in no way trying to state that we have achieved everything, but we are trying to follow the model of ‘Ram Rajya’ and establish the same, with pure intentions. This is what matters the most.” The Chief Minister said, “Each citizen must have a shelter roof above his head. The government is trying to provide an environment of dignity and honour even to the slum dwellers and trying to ensure that they gain access to proper housing facilities. Many of these houses have already been constructed while others are still in the process. A society where women are not respected and their safety is not given utmost importance could never progress. I understand that Delhi Police does not come under our jurisdiction but it would be a waste of time to crib about it. However, what we did was install CCTV cameras, locate ‘dark spots’ and install street lights, equip DTC busses with CCTV cameras and marshals; and provide free transportation via DTC buses to women.” Mr Kejriwal said, “Society should respect its senior citizens.

Hence, the government adopted various measures in this light, the most important one being- provision for ‘Teerth Yartra’. As we all know that in this last phase of life, as also mentioned in the Holy Scriptures, a man seeks to devote his time to worshipping; so when he returns from his journey, he is engulfed with a sense of immense joy and pleasure. After the judgment of the Supreme Court, a magnificent temple is yet to be constructed; and I would like to put forth in front of the senior citizens of Delhi that once the temple is constructed, I would ensure that all of you are able to visit the Ayodhya temple free of cost.” “In the Aam Aadmi Party’s Delhi Government, people belonging to various castes, class, and religious backgrounds are equal. Even in the Ram Rajya, equality was the main principle with no tolerance for discrimination. Hence, it is imperative for us to strive and live with one another in a peaceful environment, with a feeling of brotherhood,” he added.

Security ties with India a ‘strategic imperative’: US