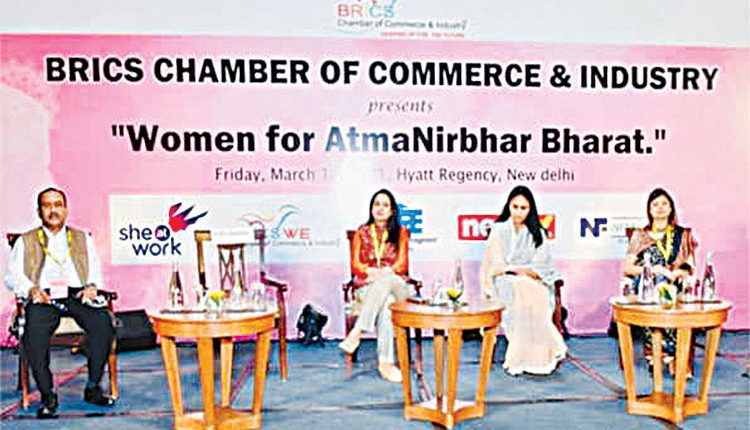 New Delhi, Mar 12 (FN Bureau) Showcasing the role of women entrepreneurs in the creation of a self-sufficient India and their involvement in the respectable and ambitious ‘AtmaNirbhar Bharat’ program, BRICS CCI Women’s Wing organised a day-long summit “Women for AtmaNirbhar Bharat” here on Friday. IAS and Special Resident Commissioner, Tripura Bhawan, Sonal Goel said, “When you empower a woman, you empower the entire family and the entire society around them. AtmaNirbhar Bharat for Women in true sense calls for empowering & encouraging local talents and boosting indigenous trades of the country.”

The BRICS Chamber of Commerce and Industry is a parent organization which promotes commerce and industry in the BRICS nations. The Chamber, founded in 2012 with the efforts of eminent professionals and entrepreneur, is a not-for-profit and non-governmental organization. BRICS CCI is a registered body under Societies Registration Act 1860, Government of India and empanelled with NITI Aayog (highest policy-making body of Govt of India) and recognized by United Nations. The session was divided in three sessions. Many prominent speakers from different organizations and sectors delivered their views in the panel discussion of the seminar.

Distinguished panelists shared their views focused on may topics like Women leadership of today, building Women Leaders of Tomorrow and Building a more Inclusive Workplace for Women. Dr Sasmit Patra said, “Mission Shakti (2002) is the strongest example of Women Empowerment. 80 lakh women receive funding from the government for women entrepreneurship. Hence, it proves that women can be both bread-maker & bread-winner giving them a sense of self-worth.” Chairman, United News of India and BRICS CCI, Vishwas Tripathi stressed that the role of women is going to be pivotal for the vision of AtmaNirbhar. Bharat. “Hence, for the inclusion of women, it is mandatory to understand the current situations and challenges facing women and taking appropriate actions,” he said. Shri Ram Mohan Mishra said, “When we speak of Women Empowerment, it is pre-requisite to provide in the opportunities to work on socio-cultural, political and economic aspects simultaneously. In addition, it is essential for the achievement of sustainable development as well.”

Agenda set by India for BRICS would boost trade
Kolkata, Mar 12 (FN Representative) EEPC India welcomes India’s proposed action plan during the first meeting of BRICS Contact Group on Economic and Trade Issues (CGETI) held under its Chairmanship. The action plan for 2021 would support a transparent and non-discriminatory, rules-based multilateral trading system in line with WTO vision. It has also sought to put in place a framework for consumer protection in E-Commerce and Non-Tariff Measures (NTM) Resolution Mechanism.

Given that Brazil, Russia, India, China and South Africa (BRICS) are expected to drive global recovery in the post pandemic world, roll-out of the action plan would accelerate trade and investment between India and other member states of the group, EEPC India in a statement said on Friday. Share of India’s Intra-BRICS trade to global trade has been around 14-15% and there is huge potential of growth. Measures to further facilitate trade and investment would certainly help the engineering goods industry. “We see a lot of opportunity in widening the scope of economic engagement as the grouping of the five major emerging economies accounts for about 23 per cnt of the world GDP. The five countries together comprise 42 pc of the world population and have 16 pc share in global trade,” said EEPC India Chairman Mahesh Desai. As bilateral trade with China accounts for the bulk of India’s trade with BRICS, the trade potential with other countries is sizable. In 2018-19, India’s total trade with BRICS was US$114.1 billion but out of this China’s share was US$ 87.1 billion.