Biden is about to send the Electric Vehicle Revolution into Overdrive 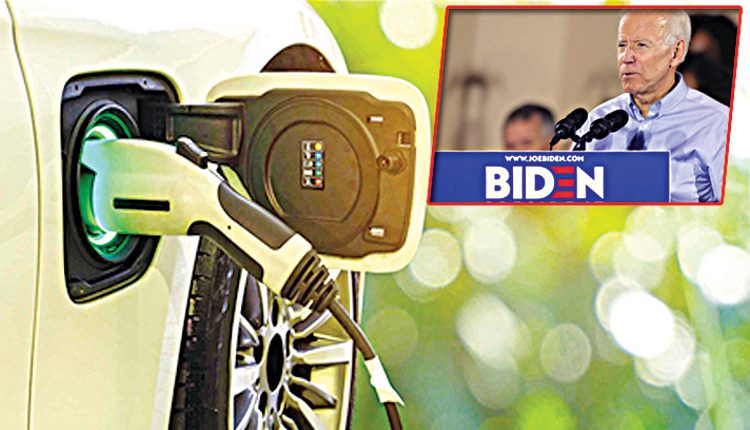 Washington, 8 Mar (FN Agency) The first few months of Biden’s administration have made one thing clear, the EV boom is just getting started. And it may be those who are already ahead of the curve that could be the biggest winners. Biden has already said climate change is “the number one issue facing humanity.” And now, he’s signaled a major shift, stating he plans to replace the entire government vehicle fleet with electric vehicles. That includes 245,000 in various federal agencies. 225,000 in the United States Postal Service… and another 173,000 in the military. That adds up to a grand total of 643,000 cars, trucks, and vans set for an upgrade on the U.S. government’s dime. And after the year we’ve seen for EVs in 2020, this should come as no surprise. After all, it led to some of the most eye-popping gains we’ve seen in recent years. Gains of over 700% in Tesla, helping them become one of the largest companies on the S&P 500. And 976% gains from the EV van company, Workhorse, throughout 2020. But after the year we just had, many are asking what’s next for electric vehicles.

Fortunately, we’ve got a glimpse into the future sitting just across the Atlantic. Norway imposed several changes in the government years ago just like the United States, and it’s led to a sweeping transformation. In fact, 54% of all vehicles sold in the country last year were electric vehicles. That’s because Norway has added massive benefits to their citizens who buy electric. Including not having to pay tolls, paying lower taxes on vehicles, and even free charging at charging stations across the country. While that may seem like a completely different world, Biden and his administration have already signaled this is where we’re very likely headed. And it’s the companies already riding the EV wave who could benefit the most. That’s why the green ride-sharing EV-related company, Facedrive (TSXV:FD,OTC:FDVRF), has seen shares surge a massive 800% over the last year. They’ve signed a number of important partnerships and deals over the last year including government agencies, A-list celebrities, and major multinational corporations. Perhaps more impressive though, they managed to grow their business throughout both the United States and Canada all during a time when ridesharing as an industry suffered during global lockdowns. Their ridesharing model is simple. Whenever customers hitch a ride with Facedrive, they have the choice to ride in an eco-friendly EV, a hybrid or a standard gas-powered car. After the customer reaches their destination, the algorithm sets aside a portion of the fare to plant trees, offsetting the carbon footprint from the ride. In other words, you ride, they plant a tree.

Through next-gen technology and partnerships, they’re giving their customers the option to make a more eco-friendly choice if they choose. And when looking at how quickly other countries around the world are adopting EVs, it’s easy to see how this could be the rideshare of the future. When looking to the future of EVs in the United States, even the origins of the boom in Norway can give insight into what we’ll see next. After they experienced a surge in domestic oil, North Sea Oil brought riches to several countries around northern Europe. But while some like the U.K. decided to invest those profits into tax cuts for the wealthy, Norway had other plans. They threw their part of the fortune into a sovereign wealth fund, investing in various different projects. And after investing some of that fund into incentives for the EV market, the industry began to take off. But it’s not just with the American government, multi-billion and trillion-dollar companies are even pouring profits into green initiatives to set themselves up for the future taking shape. Google recently issued an ESG (sustainable investing) corporate bond worth an incredible $5.75 billion. Facebook is looking to renewable energy to fuel its data centers. And Microsoft has actually experimented with putting their data centers underwater in the North Sea, powered by wind, solar, and other new energy technologies. We’re already seeing from the success of EV companies and Big Tech that it pays to go green. But Facedrive (TSXV:FD,OTC:FDVRF) has even taken this a step further, investing into other much-needed areas.

Last year, they created a wearable contact tracing technology called TraceSCAN. It’s designed to help alert those without cell phones when they’ve been in contact with someone who’s tested positive for COVID-19. With wearables gaining widespread adoption since the release of devices like the Fitbit or Apple Watch, the demand for TraceSCAN has grown in recent months. And in the coming weeks, they plan to release a new updated version with key health and safety benefits like temperature checking and vital sign monitoring. Facedrive has now signed agreements with government agencies and a major airline to use this tracing technology. Plus, they are currently in discussions to continue TraceSCAN’s growth with major multinational corporations. And Facedrive has managed to work its way into the delivery game in part with EVs as well – taking a piece of the projected $154 billion food delivery industry. While the ridesharing industry took a hit during a year of lockdowns and quarantines, Facedrive used this opportunity to grow their business faster than anyone thought. They’re now delivering over 4,100 orders per day on average. And after growing to 19 major cities, they plan to expand to more cities throughout the U.S. and Canada soon. But in the days ahead, Norway may also give us a glimpse into a revolutionary shift in the transportation industry.