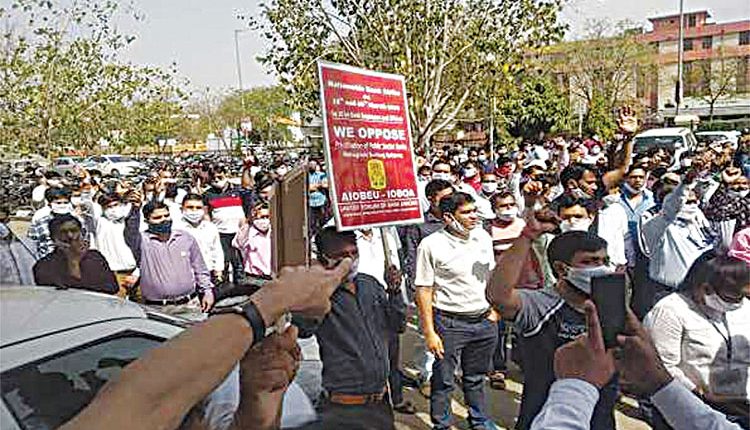 Hyderabad, Mar 15 (FN Bureau) Banking operations have been hit across the country as nearly 10 lakh employees, officers and Managers went on two-day nation-wide strike on Monday, at the call of United Forum of Bank Unions (UFBU), an umbrella body of 9 unions, to protest against the privatisation of Public Sector Banks (PSBs) as announced by Finance Minister Nirmala Sitharaman in the Union Budget on February 1.

All India Bank Employees’ Association (AIBEA) has claimed that the strike on the first day was a ‘total success’. In view of the decision announced by the Union Government in the Budget that in addition to IDBI Bank, two public sector Banks would be privatized as part of the Centre’s disinvestment plan, UFBU had given the call for strike for two continuous days today and tomorrow. Banks were already closed on March 13 (second saturday) and March 14 (Sunday) leading to four-day break in regular banking operations.

AIBEA General Secretary Ch Venkatachalam told that in the conciliation meetings held by the Additional Chief Labour Commissioner S C Joshi on March 4th, 9th and 10th, from UFBU we offered to reconsider the strike provided the Government would reconsider their decision. He said the government did not agree to the UFBU offer. Employees, Officers and Managers have joined the strike in a massive way with full enthusiasm reflecting their rejection of the decision of the Centre. He said as per the reports from various States, banking operations have been affected and paralysed. Since most of the bank branches were closed across the country due to the strike, services such as cash deposits and withdrawal, cheque clearance has not happened.

On an average, about two crore cheques/instruments worth about Rs. 16,500 crore are held up for clearance. The top Union leader said the government treasury operations have also been affected. Employees participated in the protest demonstrations in large numbers everywhere at the branches. We seek the cooperation and support of the people in our struggle to save Public Sector Banks from privatisation,’ Mr Venkatachalam said. The AIBEA General Secretary, meanwhile in a release said, Privatisation is not the solution and all Banks are making profits. Only because of bad loans and provisions for bad loans, banks are incurring losses. But privatisation is not the solution. In fact, if Banks are privatised and sold, only the big corporate and business houses can purchase our Banks. Private companies are the defaulters in Banks. Can we hand over our Banks to the same private sector, he asked. Further even today, many private banks are not doing well. Last year, YES Bank came into serious problem . The Bank would have collapsed if there is no immediate help from SBI and others. It is unfortunate that still the Government wants to privatise our Banks, he asserted.

Each teacher is expected to participate in CPD for at least 50 hrs in year as per NEP, 2020: Pokhriyal