“All of us have responsibility to make India shine on world stage” : Kovind 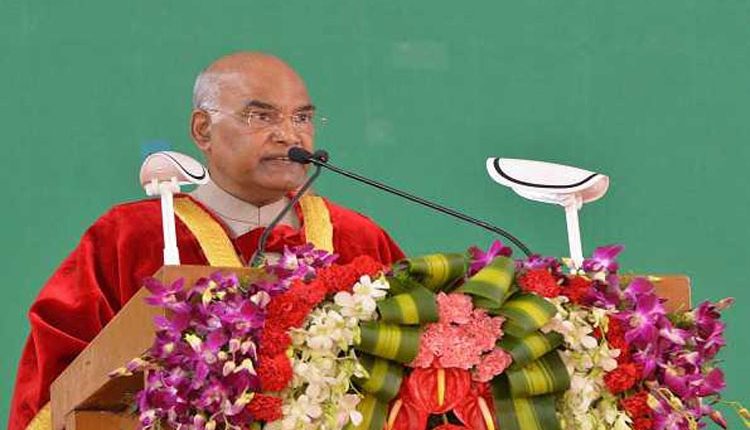 Vellore, Mar 10 (FN Bureau) All the people of the country have the solemn responsibility to do their part in making India shine on the world stage, President Ram Nath Kovind said on Wednesday. Addressing the 16th annual convocation of Thiruvalluvar University here, he said it was a matter of great satisfaction that India’s higher education system has expanded to reach out to serve the rural and marginalised sections.

‘In the process, it has become the third largest education system in the world. However, there is no room for complacency, and we have to catch up for the lost time if we aspire to scale greater heights’, he added. Noting that India had a rich system of education prior to the British rule, Mr Kovind said Gandhiji described it as a “beautiful tree” that was cut down by what the British rulers called reforms. ‘We are yet to fully recover from those drastic changes and recover our legacy’, he said, adding, the National Education Policy-2020 was a well-planned and decisive step in that direction. It has a holistic vision of transforming the way children and youth will be educated to make learning a part of personal development, while also serving the needs of society, the President said. Observing that the new policy also takes into account what is needed to build a prosperous and self-reliant nation, he said for this, the higher education system must enable equity, expertise and empowerment.

‘The National Education Policy seeks to achieve these objectives. As Sir C.V. Raman had put it, higher education institutions should lead the nation towards knowledge expansion and economic growth. That precisely is the thrust of the new policy’, Mr Kovind said. Addressing the students, the President said ‘we all have the solemn responsibility to do our part in making India shine on the world stage. We also have the opportunity to do so. Our country is in a unique position to offer crucial lessons to the world in how to live together peacefully and how to nurture nature’. As India achieves more economic growth and more equity, the world was eagerly turning to india to learn more. ‘Each of them has the capacity to write the next chapter in this India saga. All that is needed is the right aspiration’, he added.

The President said that in a short span of about two decades since it was established, Thiruvalluvar University has emerged as one of the prestigious universities in the country. It has blossomed into a premier institution, imparting quality education to students, many of whom are from economically and educationally backward regions. This also includes women who come from socially challenged sections. He was happy to note that 65 percent of the students in the university are women. ‘Our daughters and sisters are breaking barriers and achieving success in all fields. This was clear from the fact that today out of 66 students conferred with gold medals for academic excellence, 55 are women students’ , he pointed out. Similarly, doctorate degree has been conferred upon 217 scholars today of which 100 are women candidates. This reflects bright future of India. ‘When the women of our country are educated, it not only secures their own future but also of the entire country’, Mr Kovind said.