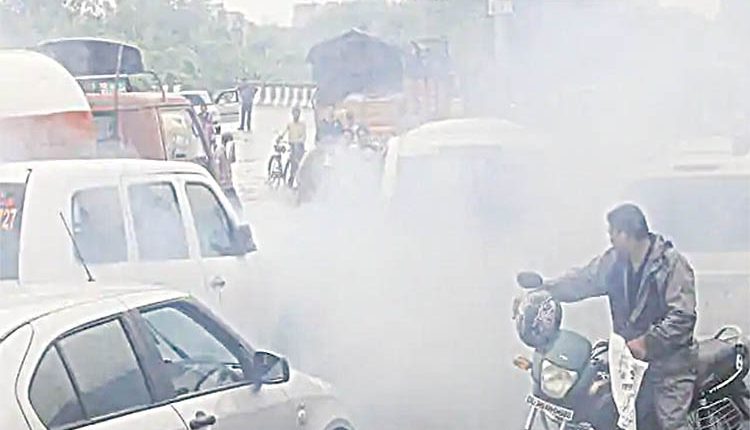 New Delhi, Feb 18 (FN Bureau) PM2.5 air pollution was behind an estimated 54,000 death in Delhi, Greenpeace said on Thursday. PM2.5 refers to fine particulate matter smaller than 2.5 micrometers in diameter. Exposure to PM2.5 is considered the most important environmental risk factor for deaths globally, and was attributed to 4.2 million premature deaths in 2015. “Delhi sustained an estimated 54,000 avoidable deaths due to PM2.5 air pollution in 2020, or one death per 500 people,” Greenpeace Southeast Asia said. Basing on its analysis of IQAir data from a live cost estmatorestmator, Greenpeace reported approximately 160,000 deaths in 2020 in the world’s five most populous cities — Delhi, Mexico City, Sao Paulo, Shanghai and Tokyo. While some cities saw small improvements in air quality as a result of COVID-19 lockdowns, the devastating impact of air pollution underscores the need to rapidly scale up clean energy, build electrified, accessible transport systems and end reliance on fossil fuels, it said.

“When governments choose coal, oil and gas over clean energy, it’s our health that pays the price. Air pollution from burning fossil fuels increases our likelihood of dying from cancer or stroke, suffering asthma attacks, and of experiencing severe COVID-19. “We can’t afford to keep breathing dirty air when the solutions to air pollution are widely available and affordable,” said Avinash Chanchal, climate campaigner at Greenpeace India. In 2020, the estimated economic cost of PM2.5 air pollution exceeded USD 5 billion in 14 cities included in the analysis. Of the included cities, the highest estimated total financial cost from air pollution was recorded in Tokyo, which suffered approximately 40,000 avoidable deaths and an economic loss of USD 43 billion due to PM2.5 air pollution in 2020. Los Angeles recorded the highest per capita financial cost of PM2.5 air pollution of all cities on the estimator, at approximately USD 2,700 per resident. “Breathing should not be deadly.

The fact that poor air quality claimed an estimated 160,000 lives in the five largest cities alone should give us pause, especially in a year when many cities were seeing lower air pollution levels due to less economic activity. Governments, corporations and individuals must do more to eliminate the sources of air pollution and make our cities better places to live,” said Frank Hammes, CEO of IQAir. Greenpeace urges that governments at all levels invest in renewable energy sources, such as wind and solar energy, and clean-energy powered, accessible public transport to protect residents from lethal air pollution.

‘We see Hydrogen as the future energy’