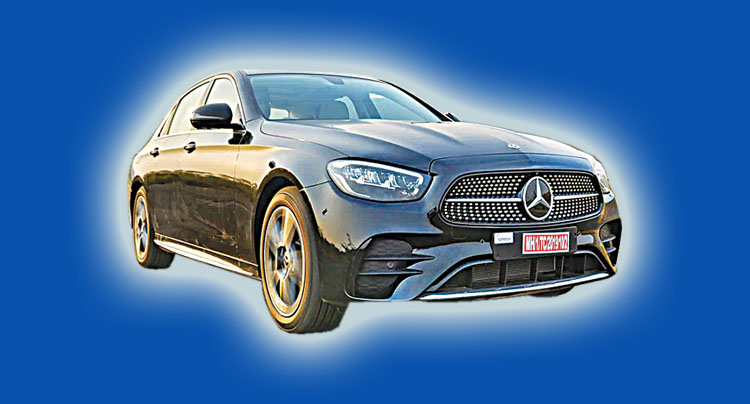 Mercedes-Benz might have a 15-model-strong portfolio in India, but the E-Class remains at the centre of it all. Since the model’s launch in 1995, over 45,000 units have found buyers across the country, and even today, one in three Mercs sold in India is an E-Class. So, you can sense the urgency at Mercedes to bring the updated E to our market at the very earliest. The latest iteration of the E-Class is here and it’s here a good few months before originally planned.

As before, India gets the E-Class in long-wheelbase avatar and there’s the option of four-cylinder petrol (E 200) and diesel engines (E 220d), and a six-cylinder diesel (E 350d). This update primarily brings in a new look and added features. Among the updates inside is the new three-spoke steering wheel that looks really classy and gets upgraded touch panels to operate the central infotainment screen and digital dials. The touch sensitivity is better than the older E’s steering buttons, but some controls still seem a bit fiddly. Another thing perhaps only your chauffeur will have to deal with is the colour of the steering. Finished in cream, it’s sure to be a pain to keep clean. Speaking of which, the E 350d AMG Line is unique for its Cream and Tropez Blue interior theme. The blue finish for the top portion of the dash and door pads looks distinctive and cool but might not be to everyone’s taste, and possibly won’t work well with all exterior colour options.

The 2021 E-Class is available in three variants and, as standard, it gets LED headlamps, a responsive 12.3-inch touchscreen, configurable 12.3-inch digital dials, e-SIM-based connected tech, vibrant 64-colour ambient lighting, a panoramic sunroof, powered rear seats with memory and a very premium soft-close door function. Exclusive trim cars add in a super Burmester sound system, rear wireless charging and a rear tablet control, while the range-topping AMG Line gets air suspension, a crisp 360-degree camera and front seats with memory. As mentioned, there are three engines on offer. Featured here is the range-topping E 350d diesel. Notably, the E 350d made the switch from a V6 diesel to Merc’s latest straight-six diesel over the transition to BS6 emission norms last year. It’s a familiar engine that also powers the S-Class, GLE and GLS, but this is the first time we’re experiencing it on the E-Class.

Performance is expectedly brisk, with easy access to power all through the rev range – ask and you shall receive, literally. Playing its supporting role incredibly well is the 9-speed automatic gearbox that works with honeydew smoothness. And with a 6.1sec 0-100kph time, you can, to borrow a phrase from social media, race into the weekend too. At higher speeds, the Merc changes direction with grace and it’s actually enjoyable to drive, so long as you have the car in the right settings – that’s drivetrain in Comfort (Sport makes the gearbox feel too urgent), suspension in Sport (tightens body movements) and steering in Sport (there’s more weight). It’s no point-and-shoot sedan, but you wouldn’t expect it to be either.

Typical E-Class buyers who are buying one for the rear seat experience will be satisfied with the E 200 (Rs 63.6-67.2 lakh, ex-showroom) or the E 220d (Rs 64.8-68.3 lakh). This range-topping E 350d (Rs 80.9 lakh) is a stretch, but the added outlay also gets you a properly strong engine and the enhanced comfort of air suspension. This is a car that’s as enjoyable from behind the wheel, as it is at the back seat. The new look is also impactful and there’s simply little to complain about the rest of the package either.

Growth of EV Sales in India Consistent Since Past 3 Yrs